The coronavirus (COVID-19) remains atop the market’s mind, but the trickledown effects impacting the U.S. restaurant industry are among the most significant unknowns. The U.S. central bank made an emergency cut on Tuesday, the first emergency move (and the largest rate cut) since the 2008 financial crisis in an effort to “boost household and business confidence,” but the rate cut isn’t likely to improve wider spread consumer fears, at least not in the near-term.

There are widely varying opinions regarding COVID-19, ranging from “hoax” to “pandemic,” but what we know (or think we know) is that the severity is significantly lower than that of its family members SARS and MERS, but the transmission rate appears higher – and, yes, it’s worse than the common flu. Fears are further fostered by the fact that COVID-19 has outrun nearly every effort to contain the spread, and “States of Emergency” are being declared, and we’re starting to see travel advisories and school closures to boot.

Here’s where the rubber meets the road – consumers are being encouraged to avoid public areas and reduce person-to-person contact (think: restaurants and malls). Internationally, many businesses in Shanghai remain fully closed or are only accepting carry out orders; the Korea Small Business Federation reported 97.6 percent of small and medium-sized businesses in Korea saw declines primarily due to decreased visits and weaker consumer activity.

At this point, we expect early spring restaurant traffic to suffer, but commodity prices will likely struggle to find much footing as well, which may ease some of the restart burden deeper into the spring months. Still, food delivery services (both in-house as well as third-party) will likely see an uptick. That said, risks remain that production cuts (especially across the proteins) emerge and likely elevate out-front price expectations. 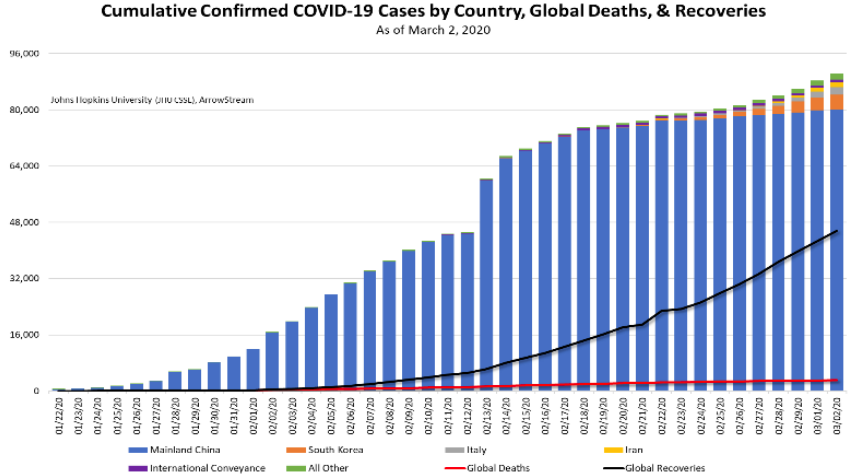 Dr. Isaac Olvera is a commodities and data analyst at ArrowStream, he is a blockchain traceability expert, and holds a Masters in Forecasting and Simulation modeling as well as a PhD in Animal Science, Production Economics. Isaac formerly worked with Informa Economics within the various meat proteins with a heavy emphasis on beef.