Highest Coffee Prices Since 2014 and Tighter Production Warrants a Reaction 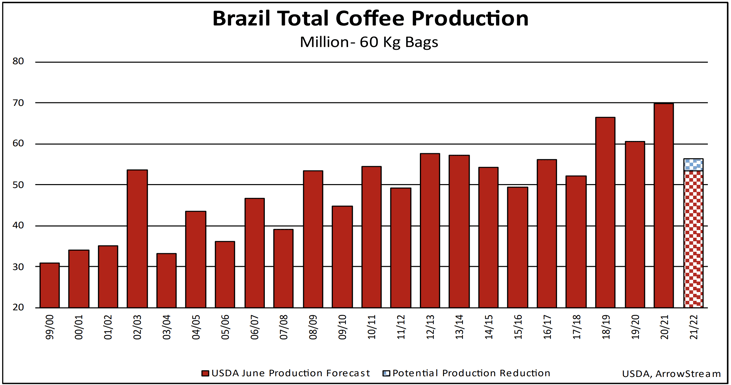 In this Q&A interview with Dr. Isaac Olvera, ArrowStream’s lead food and agricultural economist, we look at the recent increase in coffee futures and what it means for future supply and prices.

Q: Why did we see coffee futures soar this week?

The majority of the increase is due to the recent cold snap in Brazil that occurred on Tuesday, July 20, 2021. It appears that the damage was worse than initially expected, but the industry may not have a full view of the damage until sometime early next week.

The highlighted problem is that Brazil’s production was already in the off-year of the biennial production cycle, not to mention the drought and overly warm temperatures that had already been affecting parts of Brazil, as well. Additionally, it was reported that many growers pruned their trees following last year’s record coffee crop, further lowering expected yields for 2021/2022. Brazil produces a little over one third of the world’s total coffee so further impacts to production warrant a bit of a reaction. For Brazil, total coffee production was forecast (by USDA) to be about 19.5% lower than the year prior, and would have been the smallest since 2017/2018. The decline in Brazil output was expected to be partially offset by increases in other countries, but total world coffee production was still expected to be down 6.2%. With world coffee consumption continuing to rise, world ending coffee stocks were forecast to fall to their smallest since 2011/2012.

Now, all the statistics and forecasts were before this recent weather, so production is likely to tighten, and stocks may decline further than expected.

Q: How will this impact coffee prices?

From a price perspective, this likely spells higher coffee prices for consumers. Throughout the COVID-era, prices have certainly been on the rise, with the retail price of coffee in June 2021 up 8.4% from February 2020, but up a more modest 1.9% from the June prior. The consumer prices index (CPI) for coffee in June was up just 2% from last February and 1.1% from last June, or well below the rate of CPI for all items noted in June of 5.4%.

Now, earlier I mentioned that world coffee ending stocks were forecast to slip to their lowest since 2011/2012, and it’s worth noting that, from early 2010 to late 2012, retail coffee prices (as reported by the Bureau of Labor Statistics) increased 70% at their peak from $3.565 in March 2010 to $6.066 in November 2012. The futures market is pricing in the highest coffee prices since 2013/2014, and the International Coffee Organization’s reported composite global indicator price is at its highest (as of mid-July) since 2014. Again, a similar drought related production disruption was noted throughout Brazil in 2014 that ended up leaving the 2015/2016 world ending stocks total at its smallest since 2011/2012.

Q: What does this mean for the outlook of coffee?

All that said, Brazil’s already small coffee crop is likely to get smaller, and already rising coffee prices are likely to continue to head higher. It looks like the price impacts are likely to extend into 2022.

Dr. Isaac Olvera is ArrowStream’s lead food and agricultural economist focusing on livestock, meat, and poultry, grains, and oilseeds as well as emerging trends in consumer buying behaviors both at retail as well as foodservice. Dr. Olvera holds a PhD from Texas A&M University in Animal Science, Production Economics where his research concentration was in the economic effects of sustainable practices in beef cattle production.